Throughout this life, Sri Mridanga has been my spiritual connection, practice and offering. Taking shelter of the Vedic traditions, I guide students in exploring mridanga as an expression and development of our essential nature. I am here to celebrate, educate and support all levels of interest. 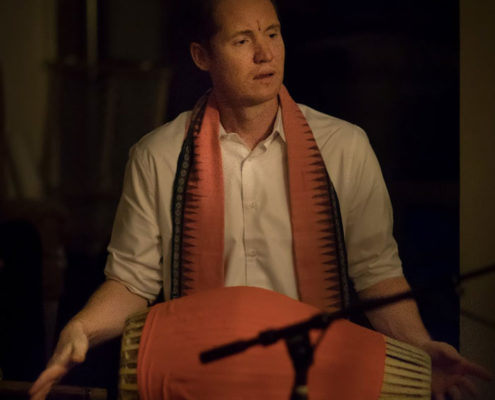 Raised in an ashrama and schooled in India’s Vedic culture, Bhima-Karma loved playing Mridanga from a young age. By his late teens, his competency was notable and he began performing, recording and touring with Krsna Das, Shyam Das, Jai Uttal and many others. Desiring to delve deeply into the sacred musical culture and technical art of his beloved instrument, he moved to India for more than 10 years, where he studied mridanga along with related Sanskrit literature, history and traditions to gain a comprehensive understanding of its full form as a developed spiritual, mystical and musical discipline. On the order of his Guru, he has returned home to share this ancient, sacred musical culture. He is now offering mridanga workshops and is available for kirtan accompaniment, lectures, musical performances and students of all levels.